From Earth to the Universe 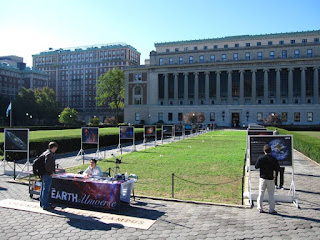 For the last week and a half, Columbia University has been host to the "From Earth to the Universe" (FETTU) astrophotography exhibit. This stunning exhibit consists of 50 spectacular images of planets, stars, nebulae, galaxies and more taken by ground and space-based telescopes over the last few decades. The exhibit is arranged as 25 double-sided, weather-proof, stand-alone panels, each featuring two high-resolution images blown up to a huge, 4-foot-by-3-foot scale. The photographs were placed in the center of campus, in front of Butler Library, where they remained 24 hours a day.

Additionally, volunteers from our Astronomy Department staffed a table next to the exhibit for 10 hours each day the exhibit was up. These volunteers answered questions about the exhibit, astronomy and science in general; they operated a solar telescope to give attendees safe glimpses of the Sun; and they gave out free NASA posters and other astronomy swag.

FETTU is one of the cornerstone projects of the International Year of Astronomy 2009 that brings beautiful multi-wavelength images of the cosmos to a wider audience in non-traditional venues such as public parks and gardens, art museums, shopping malls and metro stations. The exhibit tours all around the United States, but ours was its longest stay in New York City.

Overall, the exhibit was an overwhelming success with an estimated 10,000 attendees, over 3,000 pictures and posters given away, and loads of enthusiasm from everyone who saw the images. Thank you to everyone who was a part of making this one of the most largest astronomy outreach events in the history of New York City.

For images of our event, see our multimedia page. For more information about FETTU, please see their homepage. In case you missed out on all the free posters, check out this site to download a copy of your own.