A beautiful clear night encouraged nearly 100 people to venture to Rutherfurd Observatory where we first hear from Prof. David Helfand about reconstructing cosmic history, atom by atom. Dr. Helfand's talk detailed how the nuclei of atoms could be used to track events in prehistory from the changes in our planet's ecosystem to the very origins of the universe. This engaging talk was a condensed version of his popular Teaching Company series of lectures.

After the fantastic lecture, we heard from graduate student Jana Grcevic about the 20th anniversary of the Hubble Space Telescope. The skies were clear and we got great views of the moon, Mars, Saturn, M13, and other targets that are often difficult to see from Manhattan without the aid of a telescope. All in all, a spectacular evening.
Posted by Columbia Astronomy Outreach at 1:53 PM No comments: 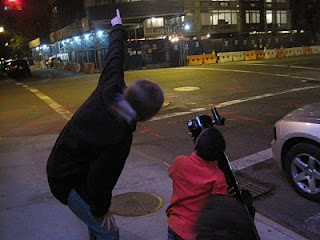 On Tuesday evening a small group of astronomy students set up telescopes outside the Magic Johnson cinema at 124th & Douglass Blvd. Amidst the mild weather we had an easy time surprising people on the sidewalk with close-up views of the Moon, Mars, and Saturn. About 150 people stopped for a look over the course of two hours. The above photo, taken by Laura Vican, shows Jennifer Weston pointing out Saturn to a new stargazer. The organizers aim to repeat the success of this outing once a month.
Posted by Columbia Astronomy Outreach at 10:25 AM No comments:

The public lecture event from 8 to 10pm on Friday, April 9th, was both informative and entertaining. About 70 people attended the lecture by Grad Student Destry Saul entitled "Hearing Cosmic Static: The Accidental and Amateur Birth of Radio Astronomy". Destry explained how Carl Jansky at AT&T's Bell Labs serendipitously made the first detection of radiowaves from distant galactic sources while conducting telegraph R&D. He also explained why astronomers were slow to grasp the importance of this new sub-field of astronomy and how it took a decade after for a radio enthusiaist, Grote Reber, to reinvestigate Jansky's findings and properly establish the field of radio astronomy. The different interests that Reber maintained, in addition to radio, and the scientific fervor that he brought to his studies really reflected the true spirit and enjoyment that scientists have when they love their work. Finally, Destry was nice enough to show us some cutting edge radio research that he and his team at Columbia are working on.

Unfortunately, the weather was uncooperative so it wasn't possible to observe but our 13th floor classroom was once again pressed into full service with Ryan Jong, a post-doc, running our 3-D wall. He showed a number of 3-D animations and simulations of galaxy mergers, formation, and of the cosmic web of galaxies in the universe. Our lecture was also followed up by tours of our observatory and telescopes and by a couple of slide shows in the lecture hall.
Posted by Columbia Astronomy Outreach at 1:14 PM No comments: