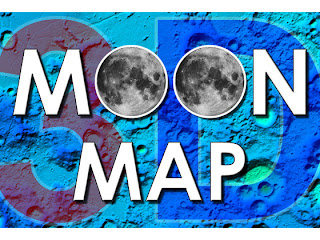 On Friday, we kicked off a new season of lectures and stargazing with a talk by cartographer Jeffrey Ambroziak. He spoke about a unique map projection technique he helped develop, called the "Ambroziak Infinite Perspective Projection." This technique allows image data and topographical data to be combined into a single 3D map which appears undistorted regardless of viewing angle. During the talk, Ambroziak shared his beautiful and unique three-dimensional map of the Moon. He also shared a series of anecdotes, including the story of how he befriended the famous science fiction writer Ray Bradbury, who wrote the forward to his book "Infinite Perspectives: Two Thousand Years of Three-dimensional Map Making." Generously, Ambroziak provided every audience member with a full sized poster of his impressive 3D map of the Moon and red/blue glasses with which to view it. You can find more information about his projection at http://www.popviewmaps.com.

Unfortunately due to weather we were unable to observe, but audience members had the option to tour the rooftop observatory, view a 3D wall presentation by Bryan Terrazas, or listen to a slideshow on the moons of our Solar System presented by Rohan Sawhney. Thanks to our outreach director Summer Ash and all the volunteers that helped make the night a success.

Join us for our next Lecture & Stargazing event on September 28th at 8pm, where we will host a talk and book signing about black holes entitled "Gravity's Engines," by Caleb Scharf.

--Jana
Posted by Columbia Astronomy Outreach at 5:22 PM No comments: