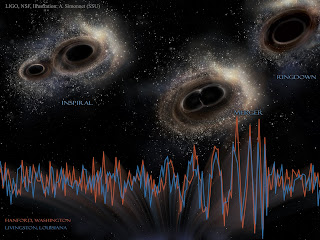 "We did it!" says the soundbite, and while the screen fills with fireworks the lecture hall fills with applause. This is the culmination of an almost century long journey between Einstein's first postulates of general relativity to our first detection of gravitational waves last September.

Maria Charisi, graduate student and guide through the fabric of space-time, took us through the last moments of the life of a binary black hole. The LIGO project has taken almost 50 years, from the first genesis of the theory to the eureka moment of detection, to find gravitational waves. By measuring the minuscule variations in space-time, a fraction of the width of the nucleus of an atom, we can observe the ripples from distant violent collisions between black holes. Since the first detection we've found 2.9 merger events (the last one we're only 90% certain of, the other results ring clearer than a bell) and when we restart it with improvements in a few years we might find as many as 50 more.

After the main lecture Jordan Borgman took us to Tatooine, Luke Skywalker's home planet to talk about how the planets of Star Wars match up with the exoplanets we're discovering in our galaxy. Meanwhile Erin Flowers guided us through 3D visualizations of the universe on all scales.

Up on the roof, Alex Teachey orchestrated a beautiful (mostly) clear night of viewing through the telescopes. In the able hands of Richard Nederlander, Aleksey Generozov and Rose Gibson we had telescopes pointing at Mars, the Moon, and the Double Cluster.