April 13: History of Astronomy and Navigation

On April 13, 260 people crowded a lecture hall in Pupin Physics Laboratories to hear Brandon Horn, graduate student in the Department of Astronomy, gave a lecture on the history of astronomy, navigation, geodesy, and photometry. Wowing the crowd with a zooming presentation, Brandon gave us a tour of major astronomical discoveries starting with the size of the Earth and moving all the way up to the expanding universe. People stayed after the talk to ask questions and explore the universe of Astronomy Picture of the Day in the lecture hall while others headed up the roof for a beautiful, clear view of the heavens.

On the roof, five volunteers helped visitors look at Mars, the Moon, the globular cluster M3, and the Orion Nebula. We were very fortunate to have such a clear view of the night skies and the huge number of visitors seemed to attest to how exciting it was to be able to use the observatories to their fullest capacity. Additionally, visitors who wanted to avoid the crowds could catch a show in our 3D theater where graduate student Yuan Li showed some videos about black holes and pulsars that the audience enjoyed. In all, a fun time was had by all.

--Josh
Posted by Columbia Astronomy Outreach at 2:23 PM No comments:

March 30: Space Rocks in the Neighborhood 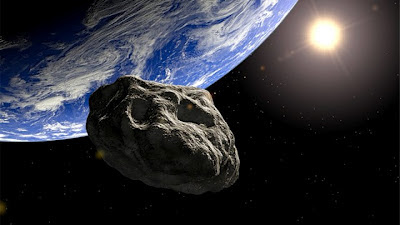 During our last public outreach night, Columbia Astronomy Professor, Greg Bryan, took a break from his normal schedule of simulating the processes of cosmic galactic evolution to inform us about objects a little closer to home. In his talk entitled, ''Space Rocks in the Neighborhood: The Dangers of Near Earth Objects,'' Prof. Bryan discusses the forces governing the orbits of near-earth objects (NEOs) and how many have impacted the Earth in the past. He explained that there are different types of NEOs depending on whether they cross the Earth's orbit or circle just inside or outside of it. What makes these objects dangerous is that for many asteroids and a few comets larger than a 1 kilometer (~.6 miles) across, real catastrophic damage can be done, with many global causalties.

Prof. Bryan also described the ranking system for potential threats by NEOs which is based on the size of the approaching object and the "projected" distance from impacting Earth. He pointed out that the key to adverting disaster by impact is to know the orbits of all concerning NEOs well in advance of a potential impact. If the orbits are known, then various efforts can be utilized to nudge the object out of an impacting trajectory towards Earth. While new telescopes and surveys have greatly expanded our knowledge of these potential "doomsday" rocks, only a complete survey of these objects, with multiple snapshots (to determine orbits), can help us prepare to deflect them out of harm's way.

Finally, Prof. Bryan pointed out different methods that can be used to deflect the objects in orbit ranging from painting the rock in a highly reflective coating such that photon pressure from solar rays can slowly push the rock away to detonating a nuclear warhead next to it to give it a more pronounced and immediate impulse away from a harmful trajectory towards Earth. You can read about NASA's Near Earth Object Program at their website and explore the near Earth environment for yourself, virtually of course, at the Minor Planet Center.

It seems that many people are concerned about our ability to track and advert a catastrophic impact, considering we had 260+ people in attendance. Even though the weather wasn't cooperating that evening, many people remained to enjoy our post lecture activities by either staying in the lecture hall and discussing the science in Astronomy Picture of the Day images, led by undergrad Jose Montelongo, or watching 3-D astronomy shows, run by graduating grad student, Jana Grcevich.

Our next public outreach lecture is on Friday, April 13th and is entitled "Where the Ocean Meets the Sky."

--Duane
Posted by Columbia Astronomy Outreach at 11:16 AM No comments: