Dec 4 - On the Care and Feeding of Black Holes 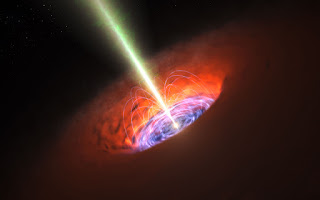 Aleksey Generozov, a 4th year PhD student in the astronomy department, introduced us to the majesty of black holes. Black holes are regions in space-time, where gravity is so strong that nothing (particles or even light) can escape from inside; we could make a black hole if we squeezed the entire earth into the size of our fingernails.

Aleksey next described the discovery of a supermassive black hole at the center of our galaxy, the Milky Way. Observing the orbits of stars very close to the galactic center, with very high precision, astronomers concluded that an object very massive (with mass a few million times the mass of the sun) and very compact (that would fit in a sphere with radius smaller than the radius of our solar system) must be hidden in the galactic center. The only feasible explanation was a huge black hole. These days, we are actually on the verge of seeing the radius of the black hole (the event horizon), with a network of radio telescopes positioned around the globe.

And although the black hole at the center of our galaxy is relatively quiet, this is not the case for every galaxy. In the '60s, astronomers discovered some very bright radio sources, equally bright as some nearby stars, which they named quasars (quasi-stars). Later, when the size and distance of these objects were measured, it was realized that the enormous amount of energy is produced when gas falls onto a supermassive black holes at the center of a very distant galaxy. The gas is brought to the central black holes, when two galaxies collide. This also explains why our own supermassive black hole is quiet; It's starving! However, there is some evidence from observations of very high energy photons, that our own black hole had a more spectacular past. The talk concluded with Aleksey and the audience singing along "twinkle-twinkle quasi-star".

After the lecture, the audience had the chance to hear about the K2 mission, which is the second phase of NASA's Kepler space telescope, lead by graduate student Stephanie Douglas. Moreover, they had a chance to further explore galaxies and black holes by watching 3D movies, guided by undergraduate Briley Lewis. The clear sky and the mild temperature gave us a wonderful opportunity for stargazing on Pupin's roof with the help of Adrian Price-Whelan, Emily Stanford, Daniel De Felippis, Rasmi Elasmar, and Richard H Nederlander. Attendees were treated to views of the Andromeda Galaxy, the Pleiades star cluster, and the Red Giant Betelgeuse. 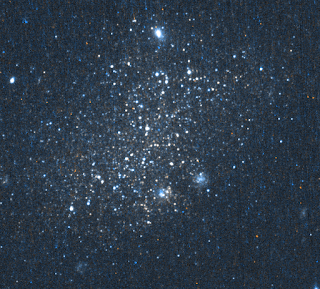 Multiple galaxies are reported missing from around the Milky Way. The cops have no leads on where to find the missing satellite galaxies. The government is keeping tight lipped. Only one investigator, Jana Grcevich, has any clues to offer on where they have gone.

Dwarf galaxies hold the secrets, and dark matter is the prime suspect. Looking at the stars in these galaxies we can work out that there's less dark matter in their centers than we expect. After deep investigation (and at least one car chase) Jana believes that this can explain why we're not seeing these satellite galaxies, and what their absence can tell us about dark matter and our galaxy.

As well as this packed talk, witnesses enjoyed some hair raising on stage demonstrations of what happens when you crash the most massive galaxies in the universe together by Zephyr Penoyre. They we're able to explore the cosmos even deeper with Shy Genel leading them through a 3D exploration of the hearts of stars and the far edges of the galaxy.

And those who braved the cold and the clouds were rewarded with some stunning views of the Pleiades, Double Cluster, Capella and many others, as our brave team of student volunteers ducked and dove between the clouds, under the steady guiding hand of Steven Mohammed.