Over spring break, Professor Kathryn Johnston hosted a group of 30 high-school students from the New York Harbor School. Prof. Johnston discussed her research on "galatic cannibalism" which focuses on how the Milky Way has evolved over time by gravitational interactions with other galaxies, i.e., capturing and accreting them. Prof. Johnston also spoke with the students about various career paths into science. Following the talk, the students toured the Rutherfurd Observatory with undergraduate Doug Thornhill.

Posted by Columbia Astronomy Outreach at 9:16 AM No comments: 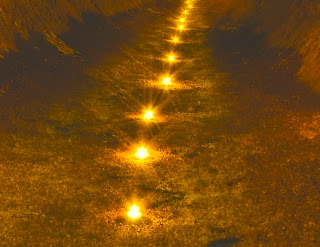 Last week, Ashley Pagnotta, a post-doc at the American Museum of Natural History, gave a talk entitled, "Supernovae: Cosmic Candles of the Universe." Ashely's research focuses on stellar explosions known as supernovae which occur toward the end of a star's life. Different phenomena give rise to different types of supernovae and by understanding the nature of these explosions, astronomers can better constrain the parameters that help us describe the behavior of our Universe.

It was less than a hundred years ago that astronomers even discovered that the Universe wasn't static, i.e., "standing still". Using the doppler effect to measure the speed at which galaxies were moving away from Earth and cepheid variable stars to measure distance, Edwin Hubble made a plot of of these two variables and discovered that the farther a galaxy was from Earth, the faster it was moving a way from us. Today, we call this plot the Hubble Diagram in his honor and continue to update it as we make better and better measurements. You can make you own Hubble Diagram using data from the Sloan Digital Sky Survey here.

While Hubble's work showed that Universe is expanding, it said nothing about the future of this expansion. To investigate this, two teams of astronomers proposed using Type 1a supernovae to probe the Universe out to greater distances, and therefore farther back in time. They used Type 1a supernovae instead of cepheid variables as these supernovae have a characteristic explosion that allows astronomers to use them as a standard candle of sorts; astronomers know how bright they are at a given distance so they can observe them at various distances and extrapolate their true distance based on their observed brightness. Both teams ended up discovering that the expansion of the Universe was *accelerating*, giving rise to the theory of dark energy, and as a result we awarded the Nobel Prize for Physics in 2011.

Ashely went on to explain how studying how Type 1a supernovae form in more detail can help astronomers minimize errors associated with their distance measurements and thereby improve our understanding of dark energy. You can view the slides from Ashely's talk here.

Unfortunately, the skies were cloudy again so after the lecture, the 120+ audience members toured the roof with the help of graduate student Adrian Price-Whelan, viewed 3D movies with undergraduate Jose Montelongo, and learned about Comet PANSTARRS with Director of Outreach, Summer Ash, and graduate student Yong Zheng.

Please come see us on April 5th when graduate student, Ximena Fernandez, will present highlights from lesser known space telescopes that are providing astronomers with great glimpses of the Universe. 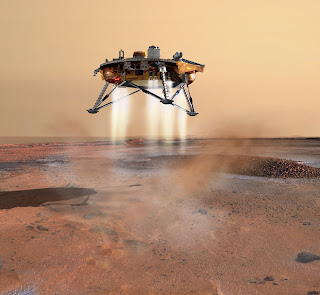 We hosted author, Andrew Kessler, and approximately 80 members of the general public on Friday, March 1st to hear all about the people and the science behind NASA's Phoenix Mars mission. Kessler spent a year with the engineers and scientists who worked on Phoenix to learn what it takes to launch a spacecraft from Earth and safely place it on the surface of another planet. Phoenix landed near the north pole on Mars, the first craft to ever land in the polar regions of the red planet. It's mission was to study the history of water in the ice-rich boundary of the Martian arctic. To do this, the Phoenix lander was equipped with a robot arm that could scoop up soil samples for analysis by an array of instruments including a mass spectrometer, a wet chemistry lab, and a high resolution imager. Not only did Phoenix discover subsurface water ice, but it also found that Martian soil contained high concentrations of chloride which converts to perchlorate in the presence of sunlight. You can read all about the Phoenix mission and Kessler's experience in mission control in his book, "Martian Summer: Robot Arms, Cowboy Spacemen, and My 90 Days with the Phoenix Mars Mission" and you can follow him on Twitter here.

After the talk, audience members toured our rooftop observatory (with the help of graduate students Jennifer Weston and Yong Zheng and undergraduate Jose Montelongo), viewed 3D movies (with undergraduate Bryan Terrazas), and listened to graduate student Steph Douglas explain the myriad of motions experienced by the Earth from our rotation around the Sun all the way out to the expansion of the Universe.

Join us for our next event on Friday, March 15th when post-doc Ashely Pagnotta explains how supernovae are used to understand the mysterious force known as dark energy. 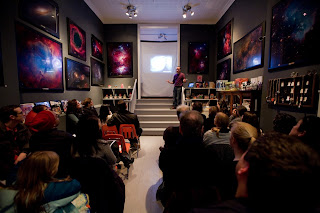 On Saturday night, graduate student Munier Salem and Director of Outreach Summer Ash helped kick off the opening of a spectacular photography exhibit at Grumpy Bert in Brooklyn. The exhibition entitled "The Universe in Color" runs through the end of the month and features 22 large format images of the Universe taken by astrophotographer (and physician) Robert Gendler.

Munier opened the evening with an informal talk on light and how astronomers make use of the entire electromagnetic spectrum in order to learn as much as possible about the Universe. Then the 40+ audience members asked some very astute questions ranging from the expansion of the Universe to extraterrestrial life. The event culminated in a lively reception which allowed everyone to examine Gendler's amazing works up close and personal.

Additional photos from the event can be found here.


Posted by Columbia Astronomy Outreach at 5:25 PM No comments: