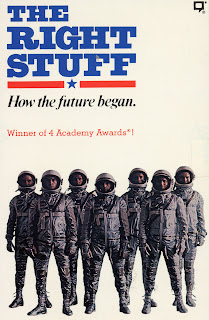 Last Friday, June 15th, we screened "The Right Stuff" for a dedicated audience who stuck around for all 3+ hours of the film which chronicles the evolution of the U.S. Space Program from its origins with the early test pilots at Edwards Air Force Base through the first class of astronauts selected for NASA's Project Mercury. The film is an adaptation of the book by the same title written by Tom Wolfe in 1979. Spanning the years 1957 to 1963, the film begins with Chuck Yeager's historical flight of the X-1 during which he was the first man to break the sound barrier. Soon after, the Russians launch Sputnik, the first artificial satellite to orbit the Earth, and the space race begins. NASA put out the call for astronauts and heavily recruited test pilots from Edwards for their ability and desire to push the flight envelope.

The film highlights the initial milestones of the first astronauts: Alan Shepard's suborbital flight as the first American in space and John Glenn's orbital flight consisting of three complete orbits to become the first American to orbital the Earth. [Unfortunately, both men had been beaten to being the first man to accomplish either feat by the Russian cosmonaut, Yuri Gagarin.] The discussion afterwards focused on the accuracy of some of the events portrayed in the film as well as the current state of the experimental X-plane program. Of note was the controversial loss of Gus Grissom's capsule, Liberty Bell 7, during recovery. Subsequent analysis shows no evidence for any wrongdoing on Grissom's part and an expedition was even mounted in 1999 to raise the capsule from the ocean floor. Lastly, the discussion also touched upon the recent news of the X-37B, which recently landed at Vandenburg Air Force Base after 469 days in orbit.

Be sure to join us for our next event on June 29th when we'll be screening "Transformers: Dark of the Moon".

Posted by Columbia Astronomy Outreach at 5:10 PM No comments: 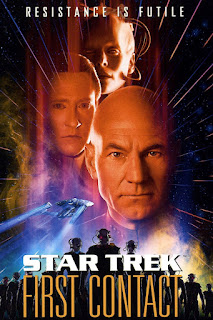 On June 1, 2012, 50 people came to see "Star Trek: First Contact" as the first film in our summer Science Fiction Film series. The movie stars the cast of the television show "Star Trek: The Next Generation" and its plot centers around a group of cybernetic machine-human hybrids attempting to assimilate humanity in a grab for galactic domination. These alien "Borg" go back in time to stop the event called, "First Contact" where human beings first contact alien life forms after inventing faster-than-light travel.

After the movie, PhD candidate in Astronomy, Joshua Schroeder, described for the audience three scientific ideas related to the movie: the Copernican Principle, the Drake Equation, and General Relativity in the context of time travel to the past. The attendees generally reported enjoying the movie and had many questions about Schroeder's critique.
Posted by Columbia Astronomy Outreach at 2:35 PM No comments: