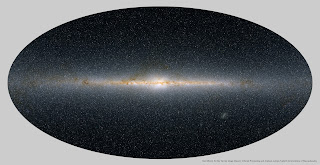 On Friday, September 13th, we launched our 2013 Fall Public Lecture & Stargazing series with a talk on the Milky Way. Post-doctoral researcher, Allyson Sheffield, presented what we currently know about the formation of our galaxy. It turns out that galaxies formed in a hierarchical manner after the Big Bang, with small clumps of gas and dust forming stars, then clusters of stars, and eventually protogalaxies and galaxies. In essence, all galaxies form by accreting other galaxies in a process called galactic cannibalism. Allyson's work deals with observing tidal streams surrounding our galaxy and tracing them back in time and space to determine what structures they originally came from. She is currently focusing her efforts on the Triangulum-Andromeda over-density.

After the lecture, many visitors headed to the roof for some clear sky observing of the Moon, Mizar and Alcor, Alberio, and the Ring Nebula while others remained in the lecture hall to hear about the recent news of the Voyager 1 probe entering interstellar space.

Join us for our next event on Friday, Sept. 27th to hear more on Voyager 1!