May 8: “Al Otro Lado del Espectro” (At the Other Side of the Spectrum) 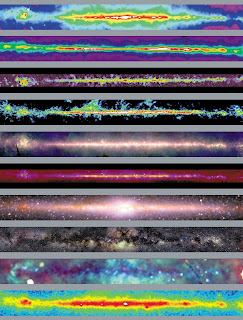 Our last public outreach night of the semester took place on May 8th and it was a very special one since it marked the first Spanish-speaking outreach event in many years. The whole event was conducted in Spanish, including announcements, the presentation, and the activities that took place afterward. It was a mixed audience, consisting of regular attendees, people interested in practicing their Spanish, and Spanish-speakers in the community.

Alejandro Núñez, a graduate student in the Astronomy Department at Columbia University, gave a talk titled "Al Otro Lado del Espectro" ("At the Other Side of the Spectrum"). Alejandro started the talk by describing the wave nature of light, and introduced concepts such as frequency and wavelength. Then he showed several spectacular images of celestial objects at different wavelengths, starting from the long-wavelength radio waves, all the way to the short-wavelength gamma rays. He included many images of the Sun, other planets, and our Milky Way.  He concluded by showing us the different telescopes capable of observing the different parts of the electromagnetic spectrum.

After the talk, many audience members went to the roof to see Jupiter and M3 through the telescopes, where they had the opportunity to talk with the Spanish-speaking volunteers.  Some  attendees stayed in the lecture hall asking Alejandro a few more questions. In addition, undergraduate student Gladys Velez-Caidedo  showed several movies on the 3D wall.  It was a good turnout and we expect to have similar events in the future.

-- Ximena Fernandez (graduate student)
Posted by Columbia Astronomy Outreach at 11:56 AM No comments: