Last Friday, about 70 people attended a lecture by Dr. Rene Ong from UCLA about viewing the universe in gamma rays. Dr. Ong talked about the unique issues with observing the most highly energetic photons and also gave the audience a virtual tour of VERITAS, an array of four telescopes in Arizona that monitor the night skies for the Cherenkov radiation that emanates when extremely energetic photons collide with the atmosphere. A number of astronomical objects have already been detected by VERITAS and other telescopes around the world that are similar in design to it. These observations have complemented observations made by other gamma-ray observatories including a space-based gamma ray observatory that was launched two years ago: the Fermi Gamma Ray Space Telescope. These observations are probing some of the most energetic environments of the universe and are giving us information about what the conditions are like in environments where there are extreme physical conditions including neutron stars, black holes, active galaxies and quasars, and microquasars.

After the lecture, the skies were unfortunately too cloudy to allow for observing, but a small tour did happen for those who wanted to see the facilities at least. Additionally, Columbia University graduate student, Duane Lee, gave a slideshow presentation featuring the images from Astronomy Picture of the Day. This website updates daily with a new image of astronomical import with an explanation written by a professional astronomer. Many astronomy enthusiasts mark the page as their homepage to give them a taste of astronomy every day when they log-on to their computers.
Posted by Columbia Astronomy Outreach at 9:15 AM No comments:

This past Friday, Dr. Allyson Sheffield, a current post-doc of the Columbia Astronomy department, gave a talk entitled, ''Galactic Sleuthing: Unraveling the Milky Way’s Past.'' In her talk, Allyson described two prevailing models for galactic formation. First, 'monolithic collapse' posits that a galactic-sized gas reservoir (of Hydrogen and Helium) collapses all at once, creating an old population halo of stars first and then flattens out into a disk composed of younger stars. Second, she presented the theory of 'hierarchical merging' that posits that galaxies are built up from the accretion of smaller galaxies and the merging of bigger ones.

Allyson then talked about how we can determine which scenario better describes the evolutionary path of our own galaxy by looking at both the group motions of stars and their shared chemical abundances. By showing us data and simulations by Rodrigo Ibata and his collaborators and by our very own Prof. Kathryn Johnston, respectively, she showed us how the merging Sagittarius dwarf galaxy was discovered by surveying stellar velocities in the galaxy along with models that describe how the dwarf galaxy would currently look which were later confirmed by additional chemical abundance observations.

Finally, she showed us how one can merge the two indicators of common ancestry to look at moving groups closer to us and determine if evidence for other accreted dwarf galaxy remnants remain in the galaxy by looking at the spectra of stars with similar peculiar velocities. She found that she could likely link certain groups to larger ones seen in the galactic halo stellar streams by models that would predict the location of these peculiar stars. Given her research and the other research she presented, we learned that merging plays a significant role in galaxy evolution and that one can recount this evolution based on remnants of past accretion events.

We had a great turn out and our attendees made full use of our facilities by watching astronomy visualizations on our 3-D wall, ran by graduate student Jana Grcevich, and by going to the roof to stargaze. It's cool to think that many of the stars we observed, including our own, exhibit group origins or movements that were probably even more defined in the past.

Thanks to the 8 volunteers and the 130 people who attended our lecture and observing night!
Posted by Columbia Astronomy Outreach at 3:12 PM No comments: 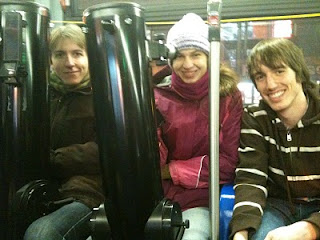 Freezing temperatures and fierce winds did not stop Alex, Jennifer, Brandon, and Neil from carrying on with stargazing plans at 125th street last night. Setting up two telescopes in front of an H+M store, they showed about 100 passersby a great view of the waxing crescent Moon. During the bus ride to the observing spot, Alex snapped a shot of the other volunteers and their scopes. All are looking forward to repeating the excursion on warmer evenings in the months ahead.

-Neil
Posted by Columbia Astronomy Outreach at 4:39 PM No comments: