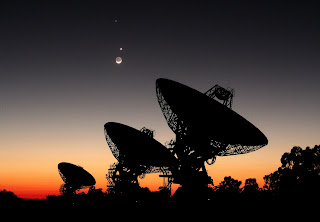 On Friday, April 19th, Ph.D. candidate Destry Saul shared with us the wonders of the Universe as seen  in the radio portion of the electromagnetic spectrum. He introduced the audience to some of his favorite radio images taken with his favorite radio telescopes. Radio telescopes can either be single dish (like Arecibo or Parkes) or arrays (like the VLA or the VLBA). Objects that emit in the radio include galaxies, supernova remnants, and pulsars. Destry's favorite objects include the closest and most powerful radio source, Cygnus A, and the brightest radio supernova remnant, Casseopeia A.

Unfortunately, the skies were quite cloudy, so observing was replaced by tours of our rooftop observatory given by graduate students Adrian Price-Whelan and Steph Douglas. Audience members were also treated to a guided viewing of our 3D Wall by undergraduate Gladys Velez-Caicedo, and a discussion of the other end of the electromagnetic spectrum, X-ray astronomy, by graduate student Yuan Li.

We hope to see you at our next event on May 3rd.

April 5: Eyes in the Sky

On a beautifully clear (almost) spring night, PhD student Ximena Fernandez gave a talk entitled "Eyes in the Sky" to a packed room of over 200 people. Ximena's talk focused on how the combination of space telescopes that operate at a variety of wavelengths have been invaluable in revealing the secrets of our Universe. Starting with our galactic center, she showed how only through the use of infrared and X-ray data have we begun to understand the nature of our galaxy's supermassive black hole. Moving to nearby galaxies, GALEX images revealed the largest known spiral galaxy, which has extended spiral arms thanks to an ongoing interaction with another galaxy. At the end, Ximena presented the newly released Hubble Extreme Deep Field, the single longest exposure in all of astronomy. The image contains over 5 billion galaxies, including the oldest known galaxy to date. The talk ended with a video that zoomed through the image to show the distribution of the galaxies in the picture. You can watch the video here!

After seeing so many wonderful images, the good weather gave everyone the opportunity to see amazing objects with their own eyes.  Most popular were the Orion Nebula and Jupiter.  Some chose to remain in the lecture hall where there was a presentation on the Cosmic Microwave Background and the new results just released by the Planck Telescope.  Finally, there was also the possibility of experiencing our 3D wall. Everyone had a great time and we're looking forward to our next event. 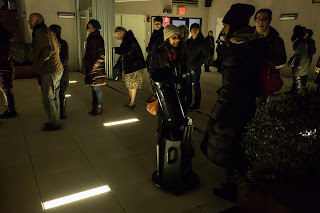 In partnership with the Brooklyn Academy of Music (BAM), Columbia Astronomy Public Outreach put on a trio of stargazing sessions in Brooklyn over spring break. These "star parties" were a complement to another event at BAM on those same nights entitled Planetarium - a musical collaboration between Bryce Dessner, Nico Muhly, and Sufjan Stevens. The three musicians produced an collection of songs by the same name inspired by the Solar System.

We transported four telescopes (three Dobsonians, and a Celestron) from the Upper West Side of Manhattan to the Boerum Hill neighborhood of Brooklyn and set them up on the roof of the new Fisher Building. Even though it was quite cold and windy, the skies were extremely cooperative, allowing for a full hour of observing on all three nights. Our celestial targets included the Moon, Jupiter, the Orion Nebula, and the Mizar-Alcor star system.

Huge thanks to BAM for reaching out to us and to all who attended. Special thanks to all our volunteers - undergraduate: Doug Thornhill; graduate students: Lia Corrales, Ximena Fernandez, Erika Hamden, David Hendel, Duane Lee, Jenna Lemonais, Steven Mohammed, Dan D'Orazio, Adrian Price-Whelan, and Munier Salem; and post-docs: Josh Peek and Matt Turk.