May 3: Why Dark Matter Matters 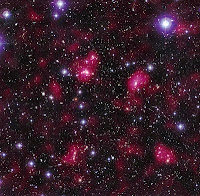 On Friday night, Kerstin Perez, a post-doc here at Columbia, told us that we can only see about 20% of the mass in the universe. The matter in the universe is mostly stuff that we can't see. The way that stars move in galaxies tells us that there's a lot more mass in those structures than we thought. But this extra mass doesn't emit light or interact with magnetic fields - we only see its gravitational effect. Because the matter doesn't emit or absorb light, astronomers have named it 'dark matter'. The current theory posits that dark matter is a fundamental particle that rarely interacts with normal matter, and then only via the weak nuclear force.

After Kerstin's talk, most of our audience members headed up to the roof of Pupin where Saturn and Arcturus were on display through our telescopes. The sky was clear and people were especially excited to check out Saturn's rings. A few folks chose to delay their observing to listen to a short presentation on the Herschel Space Observatory, the European Space Agency's infrared telescope which ran out of coolant last week and is no longer in operation. Others watched films about the universe on our 3D wall.

Posted by Columbia Astronomy Outreach at 4:08 PM No comments: