Professor Kathryn Johnston gave a great lecture on Friday, October 17, about how galaxies collide with each other. With the help of simulations and a comparison to observations she explained that collisions among galaxies are common in the universe, commenting that many galaxies are in fact expected to be the remnants of galaxy mergers billions of years ago. Applying these concepts to our own galaxy, she presented some of her own research searching in the Milky Way for the tell-tale signs of recent galactic mergers: tidal streams. While in fact, through careful astronomy, we do see several tidal streams, Prof. Johnston showed that, through simulations, we expect our galaxy to merge with dozens of smaller, dwarf galaxies. She ended the talk with a video showing a simulation of what is expected to happen in a few billion years when our galaxy collides with our closest major galactic neighbor, the Andromeda Galaxy.

Unfortunately, the weather was cloudy so no observing was possible, but one of our graduate students, Jana Grcevich, displayed 3D videos with our dual projector setup. Another graduate student, Josh Schroeder, took visitors on a tour of our telescopes and explained their history. We also had two mini-lectures about techniques used to find planets in other solar systems, and planetary nebulae. From the 120+ visitors that enjoyed Kathryn's talk, we received a great deal of excitement to come back in the future, especially during clear weather. Thanks also, to the 5+ volunteers that made the event possible!
Posted by Columbia Astronomy Outreach at 10:42 AM No comments:

On October 7 at 7:30 pm, about 30 students from the Chemistry Clubs at Yeshiva University visited the Astronomy Department to get a tour of the heavens. Graduate student, Jana Grcevic gave a presentation on color and chemistry of the heavens as well as a view of our 3D movie theater. Then, we proceeded up to the roof to get views of Jupiter, Alberio, and the Ring Nebula.
Posted by Columbia Astronomy Outreach at 3:21 PM No comments: 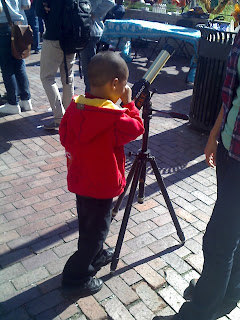 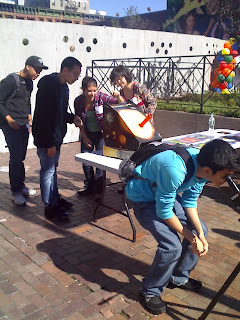 October 1: The History of Martian Exploration

On the 1st of October Jeff Andrews presented a talk on the history of Martian exploration. The crowd were very receptive and interested and the majority of the hundred or so, stayed for the entire nights activities. While there were a few technical and practical glitches, the crew were able to improvise their way to solutions. Special mention should go to Yuan and Brandon for going above and beyond their roles.

The crowd responded well to the background music played before the event during the introductory slideshow explaining the program for the night. I think that this is a nice professional touch that should be continued. Observing was very successful on the roof, as were the two informal presentations in the lecture theatre.
Posted by Columbia Astronomy Outreach at 2:07 PM No comments: