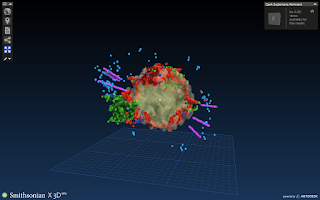 Our speaker, Kimberly Arcand, didn't come from an astronomy background. She began her science career as a biologist studying deer ticks, then moved into computer science before joining the Chandra X-ray Center (CXC), where she is now the visualization lead. Her job is to take the data and turn it into interesting and useful pictures. The data is beamed down from the telescope to NASA and then sent to the CXC as a lot of 1s and 0s. This is cleaned and assembled into black and white images; part of Kimberly's job is to determine how best to color these images to make them informative. Often, Chandra images are colored by the X-ray energy range or the dominant chemical/element.

Color has meaning. Kimberly spends part of her time studying responses to different color schemes, and choosing the right color scheme based on the audience for an image. Scientists think of blue as hottest, but culturally most people associate red with heat. Because Chandra images are important for outreach to the general public, her team picked red for the hottest parts of an image, rather than the blue that the scientists wanted.

Kimberly also told us about her work on visualizing the Cassiopeia A supernova remnant. Chandra (along with the Spitzer infrared telescope and Hubble Space Telescope) has observed this expanding shell of gas over many years, and you can actually see the gas moving outward in images taken several years apart. There is enough data that her team could use software borrowed from brain imaging to make the first 3D model of a dead star. She showed us a movie where we flew through the Cas A remnant. They also made a 3D printed model of the remnant - you can download the free file here if you want to hold your own dead star in your hand.