February 15: My Life as a Higgs Boson 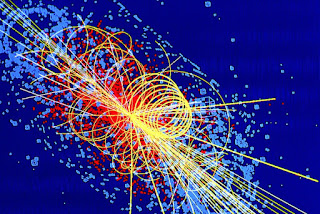 Friday, February 15th, Gladys Velez Caicedo had the very difficult task of explaining what exactly the Higgs Boson is and how its existence is necessitated by the Standard Model of Physics. The Standard Model explains all the particles we know, such as protons, neutrons, and electrons, along with their interactions. Gladys is a second year undergraduate at Barnard College studying Astrophysics and Literature and is a researcher at Nevis Laboratories working with the Very Energetic Radiation Imaging Telescope Array System (VERITAS) and the Fermi Large Area Telescope (LAT) aboard the Fermi Gamma-ray Space Telescope. If you missed the talk or if you just want to immerse yourself in some hard-core physics, you can view the slides from Gladys's talk here.

Over 175 people came out for the event, and we were lucky to have the roof available for star-gazing for an hour after the lecture despite the encroaching cloud cover. The 3D wall was manned by Bryan Terrazas.

After the lecture, I led a small discussion in which we talked about the recent meteorite impact in Russia, along with the near-Earth asteroid that came within 17,200 miles of us, closer than orbiting equatorial geosynchronous satellites! In comparison, the moon is between 220,000 to 250,000 miles away. The discussion was slightly free-form due to the recent nature of the event, and it included us watching some internet videos from Russia. The discussion also focused on efforts humans are undertaking to detect future near-Earth asteroids and possible collisions. Thanks to all who came and participated in this Friday’s outreach program!

--Emir Karamehmetoglu (undergraduate student)
Posted by Columbia Astronomy Outreach at 9:39 AM No comments: 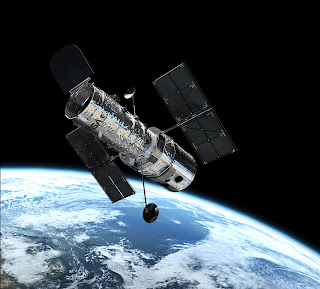 On Friday, February 1st, we kicked off our spring Public Lecture & Stargazing series with not a lecture, but a film. Saving Hubble is a documentary that chronicles NASA's decision to cancel the Hubble Space Telescope in 2004 and the subsequent public outcry. Filmmaker David Gaynes interviewed people far and wide on their thoughts about the pioneering space telescope that became a household name, from scientists and engineers who worked on Hubble to amateur astronomers, cabdrivers, and kids who are self-proclaimed "Hubble Huggers." After the screening, Summer Ash led Q&A with David and Ph.D. candidate, Christine Simpson.

If you missed the film, you can see a clip of it here and find out about upcoming screenings here.

The event attracted a sizable audiences of over 200 people who got to see some great sights from the rooftop telescopes after the film, thanks to the clouds that decided to clear out. Graduate students Jeff Andrews, Lauren Corlies, Ximena Fernandez, and David Hendel had telescopes trained on Jupiter and the Orion Nebula, both wonderful offerings of the winter sky. We also had the 3D wall up and running.

Join us on Feb. 15th for our next event: My Life as a Higgs Boson.