September 21 - Clocks of the Universe 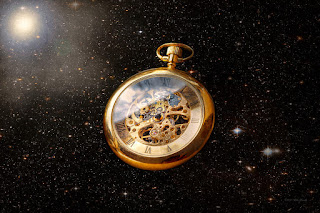 Imagine that half of your wedding guests show up at the venue a month before the event because the government’s decision to add a month to this year’s calendar did not reach them. Turns out that such a scenario could not be completely ruled out in ancient Rome. Mihir Kulkarni, our speaker on Friday, opened our eyes to how the way we measure and keep track of time has evolved through history and how different cultures use different systems.

Until recently, no man-made device could match the regularity of celestial movements. As a result, we used the Earth’s spin, its rotation around the Sun and the Moon’s movements to measure time. These measurements became encoded in the calendars that helped regulate human activity, from seeding to religious festivities. Small differences between the actual movement of celestial bodies and that captured by calendars add to the point where they become noticeable and sometimes, disruptive. Such disagreements were often dealt with through ad-hoc adjustments, but ultimately they inspired calendar refinements based on more accurate astronomical models. This way, we learned about hard-to-measure phenomena such as the precession of the Earth’s rotation axis. As the axis wobbles not unlike that of a spinning top, the closest star to the north pole -called the North Star-, changes. This shift occurs on timescales of thousands of years, long compared with a person’s lifespan but measurable through history.

Finally, minute perturbations and secular changes to the Earth’s movement relative to the rest of the universe pose a fundamental limit to the precision with which we can measure time. To beat these limitations, our current time standards do not rely on astronomical calculations anymore, but that has not removed all implementation challenges, as the “Unix 2038 year” problem illustrates.

After the talk, Mihir answered many insightful questions from the audience. You can also find a detailed summary of the talk by Steven Fertig, of the Amateur Astronomers Association of New York, here.

Clouds prevented us from star gazing, but we had the opportunity of touring the Rutherfurd’s observatory facilities lead by Daniel and Matthew while Douglas discussed some counter-intuitive properties of black holes with the support of animations in our 3D wall.