Stella Kafka, Director of the American Association of Variable Star Observers (AAVSO), gave a dynamic talk on variable stars, terming them "the good, the bad, and the explosive". Good variable stars show very regular periodic signals that can be directly tied to physical processes - like stellar pulsations. Bad variable stars have messier variability, such as star spots rotating in and out of view as they evolve. Finally, some stars explode and suddenly brighten by orders of magnitude. They may explode once (supernovae) or experience smaller surface eruptions (classical novae). 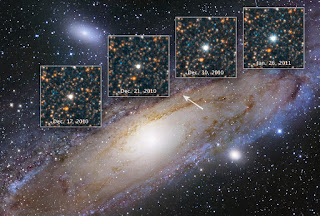 The AAVSO has been collecting data on variable stars for over a hundred years since its founding at the Harvard Observatory in 1911. They are an organization of amateurs who observe variable stars, and their data contributes to professional astronomical research. Even interested members of the public without telescopes can contribute (website).

Oct 2: The Glorious Past of Our Monster Black Hole 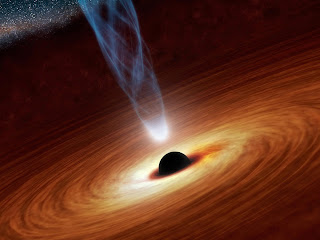 Last week, physics graduate student and NASA fellow, Shuo Zhang, introduced us to the monstrous black hole in the center of our galaxy. It is well established that every massive galaxy hosts a supermassive black hole in its center and Milky Way is not an exception. Astronomers analyzing the orbits of stars in the galactic center, enabled by advancements in observing technology, realized that the only feasible scenario for the dark object in the center is the galaxy is a black hole with mass of a few million times the mass of the sun.

The black hole is known as Sagittarius A-star (SgrA*), since it is located near the border of the constellations Sagittarius and Scorpius. Being the closest supermassive black hole we can observe, SgrA* is of great astronomical interest. But is it a typical black hole? SgrA*, is one of the quietest supermassive black holes among all the nearby galaxies. However, that wasn't always the case. Recently, the Fermi Gamma-ray Space Telescope discovered a bubble of gamma-rays surrounding our galaxy, which indicate that 2 million years ago, the black hole was very active, swallowing gas and expelling in at large distances.

Shuo also mentioned her own work observing the black hole at the center of the galaxy with an X-ray telescope called NuSTAR (a NASA mission, in which Shuo's research group here at Columbia was a major contributor). Shuo observes sporadic X-ray flares, which last for a few seconds. During these flares the black hole becomes hundreds of times brighter and then returns to its quiet state. The origin of the flares is still unknown and it has been suggested that we observe the heated remnants of an asteroid that was ripped apart by SgrA*.

Unfortunately, the weather did not cooperate to allow stargazing. Whoever stayed after the lecture had a chance to see 3D movies of the galaxy lead by undergraduate student Richard Nederlander, or hear a short presentation by graduate student Emily Sanford, about the exciting discovery of water on the surface of Mars.