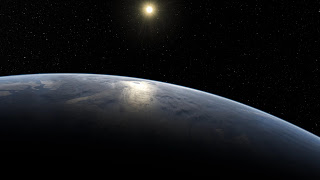 On Friday night, author and astrobiologist David Grinspoon shared his new book, "Earth in Human Hands", with us. He claimed we are entering a new era on earth called the Anthropocene - the age of humanity. For better or worse, we are reshaping our planet, and we have the capability to be aware of and intentional about the changes we enact. He also told us about another species living 2.5 billion years ago that caused catastrophic climate change: cyanobacteria learned to generate O2 through photosynthesis, which changed the composition of atmosphere and that destroyed many other bacteria that thrived on the previously methane-rich atmosphere. He also made the distinction between inadvertent vs intentional changes in climate. For example, when we began driving cars on a wide scale, we didn't initially understand the environmental impact that would have. However, in the 70s, the world responding to ozone depletion by banning chlorofluorocarbons (CFCs), intentionally working to recover that protective layer between the Sun and us. Finally, Dr Grinspoon believes we can positively affect future climate, even beyond reversing the effects of humans on the climate - we could avert a future ice age, for example, since we know those happen periodically even when the Earth is left to its own devices.

After the lecture, Dr Grinspoon signed copies of his book, and then undergraduate Erin took the audience on a brief tour of the other planets in our solar system. Upstairs, undergraduates Richard and Cierra showed movies on the 3D wall, and graduate students Aleksey and Daniel led roof tours.

Posted by Columbia Astronomy Outreach at 4:43 PM No comments: