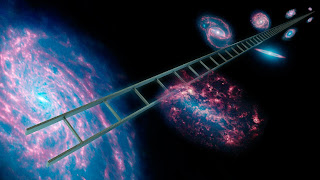 Our last public outreach night of the spring semester was a special version, as the whole event was conducted in Spanish. Although the event was targeted to the Spanish-speaking community of New York, the audience was mixed, as some non-Spanish speaking attendees chose to skip the talk and head directly to the roof top to observe the sky. We were lucky enough that night to have bright Jupiter and the Moon easily accessible from our telescopes.

José Zorrilla, a graduate student in the Astronomy Department at Columbia University, gave a talk titled “La Escalera de Distancias Cósmicas” (“The Cosmic Distances Ladder”), in which he explained some of the ideas and methods used in astronomy to determine distances across the universe. He began by explaining the concept of trigonometric parallax and how astronomers use it to measure the distance to nearby stars. He then talked about astronomical objects known as standard candles, such as supernovae and some types of variable stars. These, he explained, can be used to measure much greater distances, to galaxies in the vicinity of the Milky Way and beyond. Lastly, José talked about redshift as a way to measure distances to the most faraway galaxies in the universe. To put it all together, José explained how the different methods rely upon others to determine distances to the most remote objects we know in the universe, hence the term “ladder”. He also pointed out that the discovery of new distance measuring methods has led the revolution in our understanding of the universe and its true extent.