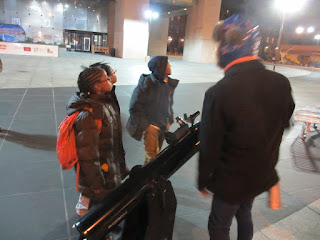 Five members of our department ventured out on a beautiful, clear evening into neighboring Harlem last night. We brought with us two small telescopes and loads of NASA bookmarks and posters to give out to interested participants. Setting up on the Federal Plaza at 125th street and Adam Clayton Powell (just down from the Apollo Theater), we pointed our telescopes towards some of the highlights of the sky this season: Jupiter, Mars, and the first-quarter Moon. Many curious passersby stopped to see what we were doing there and to take a glimpse of the heavens. Some individuals just wanted a chance to see the sky, while others wanted to discuss something astronomical they read in the news or heard from a friend. 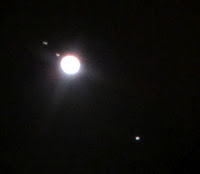 In the end, the clouds came up to block our celestial viewing, and the wind shook our telescopes and made it unpleasant to stand around. We returned home, satisfied to have reached out to around 120 people over the course of the night. Great work, Bryan, Jennifer, Jose, and Marcus!

--Cameron
Posted by Columbia Astronomy Outreach at 7:05 AM No comments:

February 17: Life in the Universe 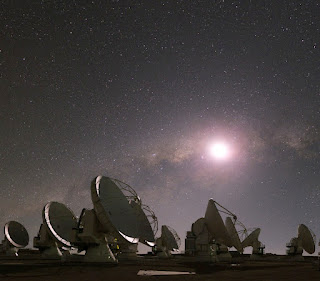 Last night, we had a very successful outreach event headlined by PhD student Maureen Teyssier discussing where to look for Life in the Universe. She outlined the various components we understand to be necessary for life to exist elsewhere in the Universe including appropriate elemental materials, liquids, energy and stability. Furthermore, she pointed out the various ways in which we humans are searching for life, both in and out of the Solar System. If you want to know more, Maureen's talk was inspired by "The Search for Life on Other Planets" by Bruce Jakosky.

There were excellent conditions for observing, so attendees who went to the roof got to catch a glimpse of Jupiter and its moons, the Double Cluster, and the Orion Nebula through our telescopes. We also the 3D Astrowall demonstrations of educational astronomy briefings. In the lecture hall, there was discussion of recent astronomical news of observations and modeling of galaxy collisions and a Q&A period with graduate students and postdocs from the department. In all, we had about 200 people come join us.

Our next event is Friday, March 2nd, hope to see you then.

--Cameron
Posted by Columbia Astronomy Outreach at 10:11 AM No comments:

Last night, graduating grad student, Jana Grcevich, kicked off our Spring lecture series by recapping the "Top 11 Astronomy Stories of 2011." Some of the highlights included: the most massive galaxy cluster found, a possible detection of the Higgs boson, a possible detection of a supermassive black hole devouring a star, the 2011 Nobel Prize in Physics going to three astronomers, and the discovery of over 3000 new exoplanets.

Jana ranked the new planet discoveries as number one on her list and many people would agree. Understanding and determining the available real estate for life to grab a foothold in our galaxy, let alone the rest of the Universe, ranks as one of the top 3 questions asked by humanity since humanity could ponder its own existence. Jana explained how the discoveries were made, by the Kepler space telescope, by stating that it measures the dimming of light from a star to determine the nature of the object causing the dimming due to occultation (the object passing in front of the star). She then focused on some of the gems from this exciting database of planets which included the discovery of a super earth-massed planet (roughly 2.5x) orbiting around its star in the habitable zone - an object known as Kepler 22b. Afterwards, she pointed out some planets orbit around binary stars, giving a shout out to the fans of Star Wars who recall Tatooine’s planetary system. Last, but not least, she displayed the best determination for many planetary systems’ orbits and configurations which showed us that planetary systems similar to our own are actually common place and not rare as previous thought based on the planetary systems discovered before the Kepler mission.

Many good questions were asked from the 140+ attendees last night, proving that a recap of the LAST year’s exciting discoveries was a great way to start off THIS year’s lecture series.

--Duane
Posted by Columbia Astronomy Outreach at 11:03 PM No comments: