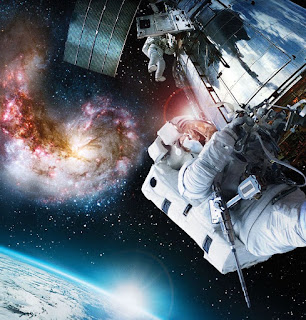 The Hubble Space Telescope has been humanity's eye on the universe for over 25 years now. In honor of the observatory's birthday this year, last Friday we screened the IMAX film "Hubble" at Columbia. We were moved to a smaller room this year, but one of our biggest crowds ever came out to celebrate Hubble with us.

Hubble was launched in 1990, but was partly disabled until a 1993 servicing mission installed a contact lens (of sorts) that allowed Hubble to reach its full potential. Though the movie included clips from the launch and first servicing mission, it focused on the final shuttle mission to Hubble in 2009 (there were four servicing missions with five shuttle visits in total, not including launch). We watched as the astronauts, including now Columbia Engineering Professor Mike Massimino, persevered through technical and mechanical challenges to replace important instruments and stabilizing gyroscopes. These repairs enabled Hubble to continue its crucial role of observing our universe.

Another highlight of the film was the animated fly through of the iconic Hubble image of the Orion Nebula. The Hubble data on Orion is so detailed that scientists at the Space Telescope Science Institute and the National Center for Supercomputing Applications were able to reconstruct the Nebula in 3D. Although we couldn't show the 3D version, flying through the brightly colored nebula and zooming in to see the gaseous disks around infant stars took everyone's breath away.

After the movie, we showed a simulated clip of the Andromeda Galaxy colliding with our own (based on Hubble data), along with a cool solar system model built in the Black Rock Desert. On the roof, graduate student Steven Mohammed and four other volunteers who showed off the Andromeda Galaxy and the Ring Nebula. And when one of our 3D projectors on the 13th floor crashed, undergraduate Briley Lewis and grad student Zephyr Peyore thought fast and created a new presentation to educate visitors.