Nov 10 - Going out in style: Nebulae at the end of a sun-like star’s life 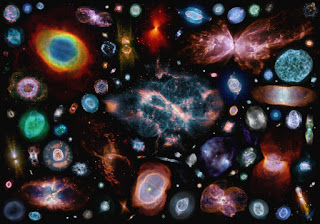 Our speaker this week was Rudy Montez, an astrophysicist at the Chandra X-ray Center of the Smithsonian Astrophysical Observatory in Cambridge, MA. Rudy studies "planetary nebulae," the ghostly shells sloughed off by dying stars.

Rudy began by showing a gallery of beautiful Hubble Space Telescope photographs of planetary nebulae, explaining how the various colors tell us about the composition of the layers of each nebula. He noted that astronomers always expected planetary nebulae to be spherical, because they're believed to form as the outermost layers of a giant star expand away in all directions from the hot core.

But that's not what we see! Real-life nebulae display amazing, complex structure, including dumbbell-shaped bi-polar lobes. Rudy explained that the leading hypothesis to explain the formation of these lobes is that a donut-shaped ring of dust surrounding the dying star blocks the star's outer layers from expanding in certain directions, forcing them out at the opposite openings of the donut hole. The origins of this ring of dust are not quite clear, but they may be leftover debris from a pair of binary stars orbiting each other at the center of what will eventually be the nebula.

Rudy then discussed his area of particular expertise: X-ray observations of planetary nebulae from the Chandra space telescope, which give us a window onto the hottest, densest central regions. He showed beautiful composite images of Chandra, Hubble, and Spitzer data, which illuminate, respectively, the innermost, middle, and outermost regions of planetary nebulae. Three windows onto these extraordinary objects.