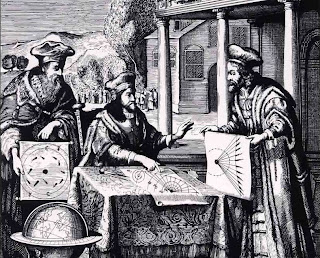 Scientists do not always agree with each other, and many times, scientific progress is made through debates. On Friday, November 8th, graduated student Jennifer Weston gave a public lecture about a few of the greatest arguments in astronomy in the past 150 years, and how they were resolved. One of the biggest debates in the history of astronomy and astrophysics, the 'Great Debate', was about whether the Milky Way, our own galaxy, was the entire universe, or there were other galaxies out there, seen as the "spiral nebulae". The debate was eventually resolved by the work of Edwin Hubble, which shows that the spiral nebulae are not only galaxies outside of our own, but they are also moving away from us at high speeds.

After the lecture, many people went to the roof where graduate student Adrian Price-Whelan showed off the Moon and Albiero along with Andrew Emerick, Susan Clark, Aleksey Generozov, and David Jaimes. On the 13th floor, visitors enjoyed 3D astronomy movies with Barnard student Gladys Velez-Caicedo. In the lecture hall, graduate student Yuan Li presented a slide show on planets outside the solar system found by NASA's Kepler telescope.

Join us on November 22 for a lecture by Jeremiah Murphy on supernova explosions.