November 22: From the Ashes of Cosmic Explosions... 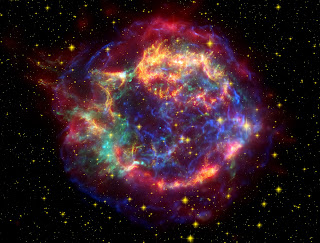 How did we get here?  Jeremiah Murphy, a new faculty member at Florida State University, shared with us the astronomical answer to this age-old question.  Or, rather, he answered the question of how his dog got here.  He traced the history of the elements in his dog's body, starting with the hydrogen and helium that formed in the Big Bang.  Those lighter elements were fused into heavier elements in the cores of massive stars and in supernovae, the explosions of those same stars.  Supernovae occur when iron builds up in the core of a massive star until that iron cannot support its own weight. Jeremiah showed us the results of his simulations showing how the iron core collapses, producing a blast wave and a wave of sub-atomic particles called neutrinos.  Those two waves tear the star apart in under a second.  The energy produced allows the production of all the elements up to uranium.

Although it was cloudy, graduate student volunteers Jeff Andrews and Andrew Emerick gave tours of our rooftop observatory after the lecture.  Other attendees visited the 3D wall, where graduate student Yuan Li showed off 3D movies about the universe.  In the lecture hall, Summer Ash and graduate students Jingjing Chen and myself answered questions and collected survey results about the night's events.  I also gave a short slideshow on supernovae that were seen on Earth and recorded in historical documents.